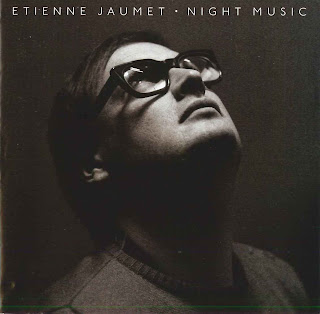 Just reviewed M Jaumet's (he of Zombie Zombie) album, Night Music. How on earth did he get Carl Craig on board? End up wishing he'd had the oomph to mangle/recast his favoured templates a bit though:
http://www.rockfort.info/content.aspx?cid=163

A few weeks ago I had a fun (and hugely educational) time at Lost In Music, a festival-come-showcase in the city of Tampere dedicated to current music from - yes - Finland. 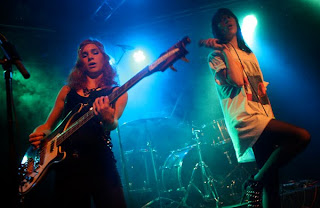 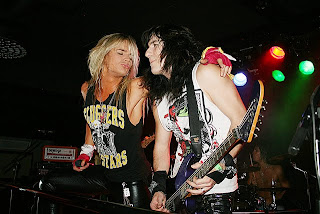 Children Of Nuggets / The Nashville Ramblers - The Trains

Four years ago I wrote liner notes for Rhino's Children Of Nuggets 4CD box set, an all-encompassing collection of '60s-influenced bands from 1976-1996. The words took up 73 pages of the book:
http://www.rhino.com/store/ProductDetail.lasso?Number=74639

Back then I was convinced that The Trains by The Nashville Ramblers was one of the best tracks of the 99 collected and wrote this:
"The Trains might be one of the most spine-tingling songs on this set, but its also amongst the most obscure and its original release is impossible to find. Despite being based in San Francisco and originally having coming from San Diego, The Nashville Ramblers only vinyl appearance was in the UK, via The Trains inclusion on the Brit-only mod-comp LP American Heart And Soul. Children Of Nuggets marks the first-ever proper release of this lost gem.

The Nashville Ramblers formed in 1985 as a veritable supergroup. Carl Rusk had been in The Mystery Machine, Ron Silva was in The Crawdaddys and Tom Ward spent time in The Gravedigger V. Bassist Tom Ward says “our aesthetic seemed a little odd, even among our own scene. I guess because it was pop, in a way, and among the diverse revivalist audiences of Southern California in the mid-‘80s, we'd find ourselves trying to bring the Everly Brothers to a roomful of suedehead scooter boys – or bringing British beat to people who wanted pure '66 fuzztone.”After inexplicably failing to make an impact as The Nashville Ramblers, the band changed their name to The Black Diamonds in 1988 and moved to New York in the early ‘90s in another attempt to carve out a niche. Yet again though, it wasn’t to be. Pity."

Now, this has come in to the world: an amazing performance of an equally amazing song that confirms that this really is one of the greatest songs ever. Extraordinary. 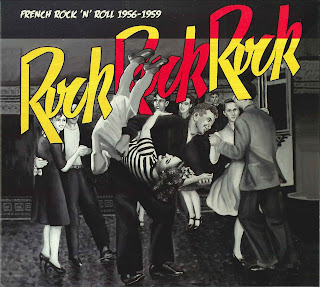 It doesn't make the case that the French - pre-Johnny Hallyday - were making tear-your-head-off rock 'n' roll, but instead says that rock 'n' roll penetrated the consciousness enough to produce these records.

A bunch of which are bonkers: accordions and clarinets on '50s rock 'n' roll!
Posted by Kieron Tyler at 20:15 No comments:

Rockfort is the only British radio show dedicated to French-language music, so it was a treat to be able to spin some choice cuts – especially to give Pierre Lapointe’s incredible music an airing.

Pierre Lapointe is Canadian - and so are Les Lutins, Michèle Richard and Alexandre Désilets. I discovered them all while in Montréal this summer:
http://www.mojo4music.com/blog/2009/08/freak_festivals_3_montreal_ecl.html
Posted by Kieron Tyler at 16:17 No comments:

The most recent RPM International CD collects the first two albums by Nigeria's Blo on one disc. They're an incredible band: a psychedelic African take on western rock that sounds like nothing else: http://www.cherryred.co.uk/rpm/artists/blo.php
It's just been covered in Sweden's Sonic magazine, in an 8 out 10 review! 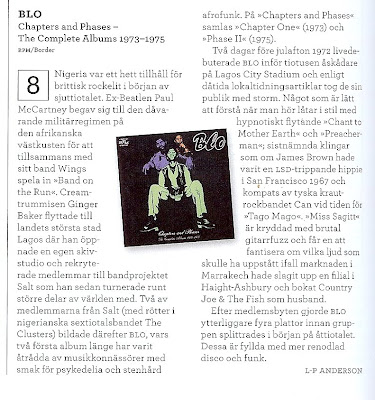 Here's a translation:
“Nigeria was a popular haunt for the British Rock elite at the beginning of the 70's. Ex-Beatle Paul McCartney went to the country, which was at the time ruled by a military dictatorship, with his band Wings to record “Band on the Run”. Ginger Baker moved to Lagos where he opened his own recording studio and also recruited members for his band Salt, who then toured around the world with him. After this, two of the members of Salt (who had their roots in the sixties band The Clusters) formed the band BLO, whose first two albums have long been coveted by connoisseurs of psychedelia and stone-hard Afro-funk . Chapters and Phases contains “Chapter One” (1973) and “Phase II”
(1975).

Two days before Christmas Eve 1972 BLO played their debut concert for 10,000 people at Lagos City Stadium, and contemporary newspaper articles say they took the crowd by storm. This is easy to understand when you hear songs like the hypnotically flowing “Chant to Mother Earth” and “Preacherman”, the latter sounding like James Brown if he had been an LSD-tripping hippy in San Francisco 1967 and had “Tago Mago”
-era Kraut-Rock group Can as his backing band. “Miss Sagitt” is spiced with brutal fuzz-guitar and brings to mind the sound that might have been produced if the market in Marrakech had opened a branch in Haight Ashbury and booked Country Joe and the Fish as band in residence. After some changes in personnel BLO recorded four more albums before the band split up at the beginning of the eighties. Those four albums are more in a straight disco and funk vein.”
Posted by Kieron Tyler at 19:09 No comments: