The undoubted highlight of February’s by:Larm in Oslo was Anna von Hausswolff’s performance at Nasjonal Jazzscene/Victoria. The moment she sat at her keyboard to begin the instrumental “Epitaph Of Theodor” it was instantly obvious this would eclipse anything seen up to that point, and was going to cast a shadow over anything to come. In turn, it transpires, shadows extend over von Hausswolff herself.

It wasn’t all about the unusual instrumentation – no bass, two guitarists, drums and two keyboards – or even her intense delivery. It was more about these grand, elegiac, soaring songs and their arrangements. Pall-bearer slow drums were precise as a hammer striking the bell of a clock: hard, bringing the power of doom metal onto the stage. Guitar was muted for the attack and heard as washes of volume-controlled decay. von Hausswolff herself was an enclosed presence. Something this immediately impactful is rare.

And seeing it in Norway was ironic. von Hausswolff is Swedish and the only comparable experience was seeing Susanne Sundfør performing The Brothel for the first time, another mind-melting show. Superficially, there is some musical and thematic kinship between the two, but once examined that instantly falls apart. As far that goes, von Hausswolff is equally akin to (the also stylistically different) fellow Swede Frida Hyvönen – someone pursuing their own path with little reference to current tropes. Regardless of these impressions, von Hausswolff was and is clearly important.

von Hausswolff has issued two albums: 2010’s Singing From The Grave and 2012’s Ceremony (now issued in the UK). Both have charted in Sweden. The former has had a second pressing of 1999 copies, which probably gives an idea of the level of sales needed to chart in Sweden. Each is credited as being subsidised by The Swedish National Council For Cultural Affairs.

Which suggests that someone somewhere, or some organisation, has taken a view that these albums are art – more likely to have cultural merit than pop.

Something unavoidable with von Hausswolff runs in parallel with her music being potentially anointed as art (not a negative or a criticism).

Her father is the sound artist Carl Michael von Hausswolff known, amongst other things, for his grasp of electronic voice phenomena (EVP), where what are apparently non-corporeal human voices are heard through static, usually the dead air of broadcast media. EVP is partially ascribed to the activities of dead people: literally, the voices of the dead. It can’t be any coincidence that von Hausswolff junior‘s first album was titled Singing From The Grave.

von Hausswolff senior apparently – he said he had taken them in 1989 – used human ashes from a Nazi concentration camp located in current-day Poland in a painting exhibited in 2012. A Jewish commentator told Sweden's Sydsvenskan that “some of the ashes might come from some of my relatives.” Whether this was deliberate confrontation or some statement on the part of von Hausswolff senior is difficult to assess, but it certainly got him attention.

Likewise, von Hausswolff junior attracted criticism earlier this year when she was pictured in Dagens Nyheter wearing a Burzum T shirt. Subsequently, she was called an “apolitical idiot” in the Swedish press. Burzum's leader Varg Vikernes was a murderer and central to the burning of three Norwegian churches. He is a self-declared white nationalist.

It stretches credulity to think that von Hausswolff junior had no idea what she was doing when she put the T shirt on and stood smirking in front of a camera with hands planted in her pockets. The fact she’s studying architecture at university suggests she can’t be that much of an idiot.

For now, it’s probably expedient to view her as a chip off the old block.

Where she differs from her father is in making music rather than abstract sound.

Both Singing From The Grave and Ceremony are stunning, the latter more so - more assured and more developed. But there are chinks: her vocal on Singing From The Grave’s “Pills” is too close to Kate Bush and Ceremony’s closer “Sun Rise” is little more than a blurred facsimile of the This Mortal Coil arrangement of “Song To The Siren”. Ceremony lacks the live show’s power and sounds muddy. She needs a well-schooled producer from outside the mainstream.

Whatever it is Anna von hausswolff is doing, it’s not just about the music. But fingers may be burned. 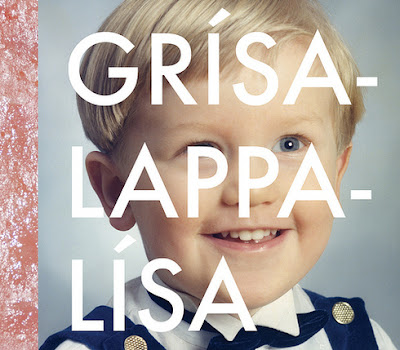 It’s rare for an totally developed debut album to turn up out of the blue. It’s even more rare for one to turn up which bears no relation to anything else around. And to compound these twin delights, it’s more than rare for it actually to be good.

From Reykjavík, Grísalappalísa are and aren’t easy to get a handle on. Aren’t because the album is entirely in Icelandic. Are because their direct, forcefully delivered music has detectable roots.

The band have been going less than a year and are fronted by two singers (shades of Sugarcubes): Gunnar Ragnarsson and Baldur Baldursson. Ragnarsson used to be in Jakóbínarína and Baldursson is known as a poet. Bassist Bergur Thomas Anderson is from Oyama, while Tumi Árnason (sax) and Albert Finnbogason (guitar) are from The Heavy Experience. Drummer Sigurður Möller Sívertsen was also in Jakobínarína.

Thanks to the Reykjavík Grapevine, it’s possible to discover that Ali is a concept album about a woman called Lísa. Whoever she is or was, it can’t have been much comfort that this lot had her on their minds. Especially so, considering the creepy paintings of condoms in the album’s word-stuffed booklet.

Handily, there is no need to know what it’s all about as Ali is so strong – strong as in powerful. Ragnarsson and Baldursson bark out the lyrics over a clipped, guitar-driven chug with shades of motorik, Killing Joke, Belfegore and Talking Heads. But it all coalesces to sound like nothing else. The presence of sax may initially seem off-putting, but it’s neither distracting or superfluous. Someone’s paid attention to King Crimson.

Even when the tone lightens on “Hver er ég?”, a sense of menace or distress remains. Before that, “Brost' ekki of bjart” is an anthem which may get lighters raised aloft. Or may scare unsuspecting audiences. Ragnarsson and Baldursson sound pretty angry

It’s impossible to work out what this would be exactly like live, but it’s certain that when experienced in person the impact will be nothing less than that of K-X-P.