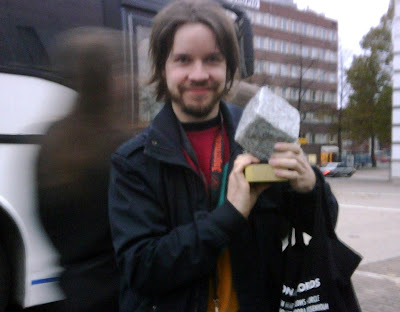 When I was in Finland in October 2009 I was lucky enough to be introduced to Fonal Records’ Sami Sänpäkkilä by Sami Häikiö of Music Export Finland. That’s Sami S above, taken just before the annual Finnish music Industry Awards-gaala dinner/ceremony, held in Tampere, the city he lives in.

He’s holding the award for the 2009 album cover of the year, given for Risto’s Sähköhäiriöön album. Although the trophy was suspiciously similar to a road cobble, this was an extraordinary piece of recognition by the mainstream music biz for a vital and important independent label – to bowdlerise the New York writer Andy Beta, it was akin to Ghostbox receiving a Brit Award. Unfortunately, no Fonal performers played Lost In Music, the festival taking place in conjunction with the awards dinner/ceremony. 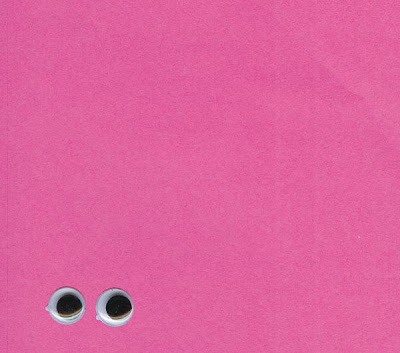 Sami Sänpäkkilä founded Fonal in 1995 with the express purpose of only releasing Finnish music. Since then, through a range of CDs, vinyl albums and singles he’s worked with 18 acts. He says that only one Fonal release has come about after receiving a demo; everything else has arrived via friends. Of course, it’s no secret that that Finland has birthed unique music: look to Pan Sonic or Pekka Airaksinen’s late ‘60s/early 70s work, both solo and as The Sperm. But it’s Fonal’s holistic vision that sets it apart.

Anything on Fonal shares an otherworldly aesthetic. As an accomplished photographer and film maker, Sami brings a vision to the label which unifies its outlook – his designs for the packages are inevitably enigmatic. The packages themselves are different to usual CDs: each is wrapped in a Japanese-style obi and has a card double or single foldout sleeve, with a card inner sleeve for the CD itself. There’s no plastic packaging for Fonal. Sami said that the sleeves are manufactured by a printer near his parents, and that he’s able to order up small print runs when necessary.

An insight into Sami’s musical grounding comes after he expresses his admiration for the Cure’s Carnage Visors soundtrack. It’s not something that often crops up. As the soundtrack to a peculiar grainy film of animated dummies, Carnage Visors was originally issued on the cassette version of the Cure’s 1981 album Faith (it’s on the current CD reissue). The film’s soundtrack was droney and repetitive. The film itself was out of focus (on purpose) and had no narrative. Droney, repetitive and out of focus – adjectives that equally apply to Fonal’s more inscrutable releases. Chuck in that Sami has acknowledged Terry Riley and Alice Coltrane as further constituents of the Fonal mindset and you’re pretty far out.

A random journey through Fonal’s catalogue is rewarding: anything and everything is great. Yhä Hämärää by Paavoharju – who Sami says are the label’s most popular band – is unlike anything else. From the sound of it, this lot from Savonlinna – who are apparently the “collective project of ascetic born-again Christians” (according to Fonal’s press info) – must live in a medieval stave church where they psychically communicate with the Far East. Their melody-imbued rustling, droning textures can be topped with vocals that sound like Vietnamese boat women. As it sucks you in, the hugely psychedelic Yhä Hämärää exerts a powerful calming effect. But there’s an unsettling edge. Kiila are a gentler proposition: a largely acoustic outfit with a communal sound that wouldn’t have been out of place on ESP Disk. They also feature Sami Sänpäkkilä in their shifting line up.

Another Fonal act that includes Sami is the terrific ES – actually, they are Sami: his solo guise. Now up to five releases, ES trades in a mood music that’s probably closest in feel to Heart Of Glass Popul Vuh. Again, it’s pretty far out, verging what you might expect Finland’s lakes to sound like if they could record. And again, jarring interludes wobble the mood discomfitingly. Hugely seductive.

Probably best known to us Brits via radio play on Stuart Maconie’s BBC6 show The Freak Zone are Shogun Kunitoki, a Helsinki quartet. Their oft-quoted mission statement is worth reprising: “perfecting their own idiom, a music of a past future that draws from the myriad synthetic sounds of the 20th century. Elements borrowed from 50’s electronic pioneers, 60´s psychedelia and minimalism, 70´s experimentalism and 90´s revivalism come together in concise instrumental compositions built on rhythmic interplay between simple repetitive motifs and between the players. Rejecting the cold bleakness of the digital domain, Shogun Kunitoki choose to craft their sounds using worn analog equipment in order to give electronic music human warmth, a soul.”

This has resulted in is a pair of peerless, mind-expanding albums that surge melodically, yet clank like steam-age electronica. Marry Joe Meek with Zukerzeit Cluster and you’re part way there. They are one of the world’s most important bands, and Fonal Records is equally as important.