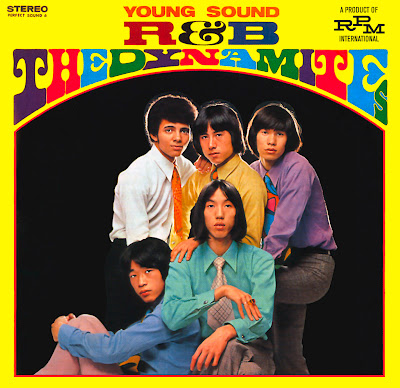 It might be called Young Sound R&B, but the sole studio album by Japan’s Dynamites wasn’t really soul or R&B, despite covers of My Girl and Mercy, Mercy, Mercy.

Now, it’s the next release on RPM International, out on 21 February.

When, in his book Japrocksampler, Julian Cope said that “The Dynamites had been considered outrageous in 1967 for their Blue Cheer version of Summertime Blues”, he nailed the sonic frenzy The Dynamites’ guitars captured at their wildest. Sadly, they never recorded their take of Summertime Blues, but their classic single Tunnel To Heaven (Tonneru Tengoku) is one of the wildest, most fuzz-drenched, Japanese records from the ‘60s. It’s heard here in both its single and album versions.

Released originally in Japan in May 1968, The Dynamites’ Young Sound R&B was, typically for a Japanese album of the period, bulked out with covers of the hits of the day. But these were no straight covers. John Fred’s Judy In Disguise is suffused with over the top fuzz guitar and a compelling mangling of Mercy, Mercy, Mercy is irresistible.

The Dynamites shone on their own songs. Nobosecha Ikenai is a swinging Stones-a-like and Manatsuno Yoruno Dobutsuen is deranged fuzz-damaged garage punk where they sing about “crazy samba nights”. Their guitarist Fujio Yamaguchi was the future leading light of ‘70s freaks Murahachibu.

This first-ever official reissue of Young Sound R&B outside Japan has been licensed for release by JVC Records and follows RPM International’s reissue of The Mops’ Psychedelic Sounds In Japan, also originally issued by JVC in 1968. The essential Young Sound R&B is supplemented by all The Dynamites’ non-album JVC singles.