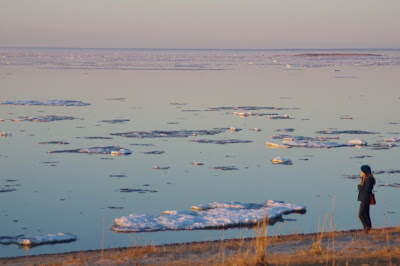 Mari Kalkun was the highlight of March’s Tallinn Music Week. Of course, there were other terrific artists, but the atmosphere she created was unique, drawing from unfamiliar sources and marrying them with a straightforward delivery. At the time, Nico and Bridget St. John seemed to be touchstones. Then Sweden’s Turid came to mind. All three share a sparseness with Kalkun, where atmosphere is at the centre of the music.

But theses names are touchstones, no more. Unless you are Estonian, there’s little specific to relate to. However, beyond the music itself, the themes that inspire Kalkun are recognisable: the landscape and family (her grandfather is heard on her second album’s Hommikuvalge [Morning Light]). A major inspiration are the lyrics of Estonian folk songs from the early 20th century onwards, which draw from the experiences of rural life. Her background is south Estonian, so the source material is quite specific. Her singing draws on the traditional regilaul form. Her instruments are guitar, piano, melodica, accordion and kannel, a mountain zither-like instrument. She sings in Estonian and has made two albums: 2007’s Üü Tulõk and 2010's Vihmakõnõ.

A knowledge of the source material or an understanding of Estonian isn't necessary. It wasn’t when seeing her live. It’s the same for both albums. Üü Tulõk is the slightly more straightforward of the two, more sparse: the standouts include the solo with accordion Heräine, and Ütsik Thät, which draws on the kannel. Loe Kumneni is most affecting, a reflective drift that evokes empty spaces. Vihmakõnõ fill things out. The way in is through the incredible accordion-based Tuulõ Käen (As Wind Blows), where Kalkun sings short rounds with herself. This folk has an effect that’s very psychedelic. Elsewhere, Vihmakõnõ builds on this mood with Kevadel Metsas (In The Spring Forest - performed below) with shards of kannel and gentle concrête-like musical textures.

It’s clear that Estonia has some terrifically interesting and great music coming out of it. Music that cannot have come from anywhere else –and it’s as significant as what’s coming from non-mainstream Finland (something on Finland’s utterly super Helmi Levyt label to come). Finland’s Lost In Music festival catalysed the thought process on Estonia, but Röövel Ööbik were the ones that started the digging off. Tallinn Music Week confirmed it, and Imandra Lake underpinned this conclusion. More from Estonia, no doubt, in due course.

Some music, with Mari Kalkun’s notes on the songs.

A setting of a poem written by 15-year old Marie Heiberg in 1905 – a candid and tragic reflection of the young poetess’s inner world, torn by the worries of war and tinged with a yearning for wonders. (joined in the end of the song by a runo-song spell for the rain to go away)


Undsõn Ilman / In The Foggy Weather

An old folk song, telling the tale of a man who takes a walk on the foggy meadow and meets his long-awaited bride. The song never really makes it clear whether it is a true story, or something that the man merely dreams of, or whether it all takes place in the hereafter.