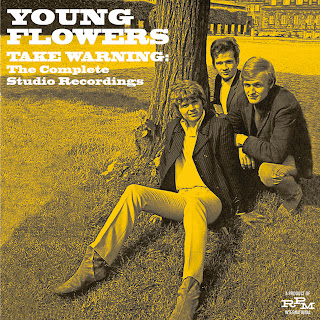 Denmark was cool years before The Killing and Borgen hit British TV screens. Julian Cope said Young Flowers’ “The Moment Life Appeared”, from their first album was, “magical”. He also praised their “totally full on freakout style” and pointed to them as precursors of Krautrock.

Take Warning: The Complete Studio Recordings is the first time all of Young Flowers’ recording have been brought together and anthologises both their albums, their non-album debut single, contributions to the film soundtrack Quiet Days In Clichy and a trio of live tracks which show how raw they could be. This is the Denmark of 1967-1969 at its freakiest.

Young Flowers formed in summer 1967. They headlined Copenhagen’s Festival of the Flower Children in September 1967. The first Danish hippy band, the first Danish rock - rather than pop or folk-derived - band to sing in their native language on album, and the first Danish to play the States, they were pioneers. Members later played with the legendary Culpeper’s Orchard and Savage Rose. They immediately hit big with debut album Blomsterpistolen (Flower Gun), recorded as the soundtrack to surreal TV series. A trio, and although influenced by Cream and The Jimi Hendrix Experience, their intense music had an experimental edge. They set Walt Whitman's poetry to music.

Take Warning: The Complete Studio Recordings is RPM International’s definitive, band-approved, collection, is a tribute to a unique band

The release date is 25 June.