This is really interesting stuff which has to be heard. The tragedy is known, the story does not need repeating (in the review that is) and this box (actively) makes the music stand apart from that. Whether the latter is by design is impossible to determine.

It’s obvious they are/were important, which makes the bare-bones packaging perplexing as the box is presumably the last word on them. But there we are.

Below is what was in Rumba (click on it a couple of times and it can be made big enough to read), and below that - for non-Finnish speakers - is the English, before it was translated.. 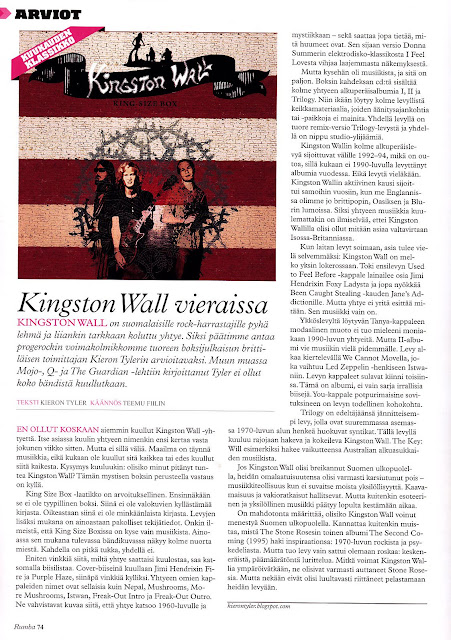 Enigmatic as King Size Box gives little away. It’s not a typical box set. There’s no photo-packed booklet. There is no booklet. With no liner notes and the minimum of credits and label copy, it’s obvious King Size Box is about the music. The sole picture is of three young men. Two have long hair, one doesn’t. Clues as what Kingston Wall might sound like come from the tracks. Versions of Hendrix’s “Fire” and “Purple Haze” offer hints. So does a version of The Beatles’ “Rocky Racoon”. Titles like “Nepal”, “Mushrooms”, “More Mushrooms”, “Istwan”, “Freak-Out Intro” and “Freak-Out Outro” reinforce the idea they’re looking to the '60s, the mystical and might know what drugs are. But a version of Donna Summer’s electro-disco classic “I Feel Love” suggests a broader outlook.

So it’s about the music. There’s a lot of it. The eight CDs include a trio collecting the band’s three albums: I, II and Trilogy. There are three discs of live material from unspecified venues, with no recording dates given. One is a new remix of Trilogy. The eighth disc comprises studio outtakes. King Size Box does little to unlock the enigma.

After sticking the CDs on, it’s even more clear that Kingston Wall are out there on their own. Sure, I’s “Used To Feel Before” borrows bits of Hendrix’s “Foxy Lady” and nods at “Been Caught Stealing”-era Jane’s Addiction. But there’s no pose here. This music just is. The modal figure which defines I’s “Tanya” isn’t the sort of thing on the minds of many bands in the ‘90s. II takes it even further. It opens with the circular “We Cannot Move”, which segues into Led Zeppelin-ish “Istwan”. But there’s a folk element too. Tracks bleeds into each other. This is an album, not a series of disparate songs. The version of “I Feel Love” is as straight as it could be. The ten-minute portmanteau composition “You” is the album’s highlight. Trilogy is a more tense album, with a greater contributions from early ‘70s-sounding synthesisers. It’s the sound of a band testing its limits. “The Key: Will” leans towards the sounds of native Australia. There’s some reggae in “Get Rid Of Your Fears”.

If Kingston Wall had caught on beyond Finland they would have soon ceased sounding this idiosyncratic – the music business cannot tolerate the individual. Templates and formulas rule. But it’s always the esoteric, the individualistic, that lasts.

It’s impossible to determine if they could have made waves beyond Finland. However, think on this – where did the second Stones Roses' album, Second Coming, look to for its inspiration? But that was rubbish, half-baked, directionless twaddle. Whatever the imponderables surrounding Kingston Wall, they would have easily aced The Stones Roses. That wouldn’t have been enough though.
Posted by Kieron Tyler at 12:06