JABULA – THUNDER AND HAPPINESS: THE COMPLETE ALBUMS ON RPM INTERNATIONAL 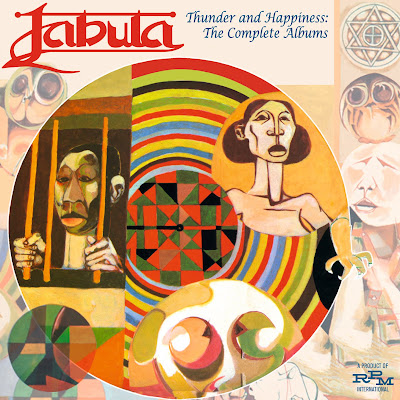 Jabula brought South Africa’s music to the world over a decade before Paul Simon’s Graceland. Thunder And Happiness: The Complete Albums anthologises their two albums: 1975’s Jabula and 1976’s Thunder Into Our Hearts.

Formed in Britain in 1974 by exiled apartheid-era musicians who had left South Africa, Jabula – the Zulu word for happiness - infused the sound of the townships with jazz, creating a compelling rhythmic stew. Their music was accessible, compulsive and fresh. Jabula were an important musical force. Mike Oldfield invited them to play on his Ommadawn and Incantations albums. Their leader Julian Bahula also played on Oldfield’s Amarok and Stevie Wonder’s Characters album.  Jabula were the subject of the 1981 film Jabula – A Band in Exile.

Julian Bahula was previously with the legendary Malombo Jazzmen. After arriving in Britain he was also central to the ANC, and organised Nelson Mandela’s 65th birthday concert in 1983 at London’s Alexandra Palace (held while Mandela was still in jail). In April 2012 South African President Jacob Zuma bestowed the National Order of Ikhamanga to Julian Bahula for his exceptional contributions to music and the arts, and the struggle for a free and democratic South Africa.

The release of Thunder And Happiness: The Complete Albums is significant, allowing this historic band to be heard again and includes an essay by Julian Bahula.