FRIDA HYVÖNEN - TO THE SOUL, AND WHAT CAME BEFORE 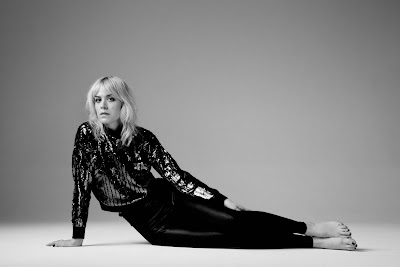 When Frida Hyvönen’s To The Soul arrived earlier this year, it was soon obvious this was amongst the year’s best albums. Subsequent revisits have proved it’s more than that – it’s a landmark album that really has to be heard. Seeing her live in Sweden was further evidence of her impactfulness, making it self evident her path is singular. If, for example, you accept the perception that Rumer (partly via her association with Jimmy Webb) takes the singer-songwriter approach of late ‘60s/early ‘70s forward, then Hyvönen snuffs that idea out. That’s not to pick on Rumer. It’s just that Hyvönen is so good and so unexpectedly fabulous. Her identity is all hers and she's utterly modern, but the tradition she's within is clear.

I briefly touched on To The Soul recently, but that needs expanding. Also, what came before needs thinking about. How did Frida Hyvönen get to this?

To The Soul begins with what seems to be a feint. The first three tracks draw from what’s identifiably ‘80s: a snappy percussion and shimmering keyboard colour that evokes The Cure circa “A Forest”. Talk Talk come to mind. Then, the album subtlety changes and unfolds in an extraordinary evolution. Her voice soars, the songs become more ornate and filigreed, although her rolling piano is always precise. Laura Nyro springs to mind (Hyvönen has covered Judee Sill in the past so that makes sense) but she appears to be a counterpart to Dory Previn. Her lyrics share the conversational, analytical and retrospective style of Previn’s. Hyvönen sings of having her mother’s hands and meeting a man whose wife reminds her of Diane Keaton. The melodies are grandly filmic, sinuous and great. Above all, this striking album is immediate. So why isn’t she dead famous outside Sweden?

Her last album, 2008’s Silence Is Wild, was issued by the US label Secretly Canadian, so obviously that didn't do the internationalisation trick. To The Soul is on Universal yet Hyvönen isn’t universally known.

Until Death Comes, issued in 2005, was her first album. The elements now familiar from To The Soul are there, but the production is (obviously) less clean. Any of the songs could fit the latter stages of To The Soul. She arrived fully formed. The difference between the then and the now is not so much in the songs and their arrangements, but in the nature of the lyrics – more direct, seemingly more about specific experience rather than observation. Obviously, it’s impossible to tell if she’s reporting actual experiences or not. Even so, they feel real. “Once I Was A Serene Child” recounts an encounter with a self-declared male “poet”, eating disorders and wanting to be one of the guys rather than the subject of attention.

Silence Is Wild was even more direct. The opening track, “Dirty Dancing”, recounts two divergent lives that come back together. The sense of loss (or past) in To The Soul is bubbling up. Castanets and a slight bayonne beat echoes Phil Spector. There’s a wee bit of Michel Legrand in the vocal intro of “Highway 2 U”. Silence Is Wild isn’t overshadowed in any way by To The Soul.

However, there are two other releases, 2007’s Pudel and 2009’s Music From Drottinglandet.

In full, Pudel is titled Music From The Dance Performance Pudel Arranged For A Small Orchestra, Piano And Voice. It’s great, and bits could fit into the trajectory of the albums – and “See How I Came Into Town” , “New Messiah” and “This Night I Recall You” are amongst her best songs. Overall, Pudel is as much about the atmosphere cast as about the songs. Still works as an album though.

Music From Drottinglandet (in full - Frida Hyvönen Gives You: Music From Drottinglandet) is more oblique and impressionistic. It was written to accompany a photo book, where she and photographer Elin Borge documented Thai women resident in the north of Sweden.The ten pieces do not have titles. Each is given a Roman numeral: I – X. Vocals are wordless, and II is pretty much “Over The Rainbow”. Bits sound like Another Green World. Other bits sound curiously middle European and Hawaiian.

To The Soul obviously isn’t a one off. It and everything that preceded it stands on its own. Together, this is a significant - powerful - body of work. So how come then that Frida Hyvönen has remained – despite having lived in Paris – resolutely Sweden’s?