KIKI PAU – INTERVIEW: THROUGH FINLAND’S PSYCHEDELIC VORTEX TO THE PINES 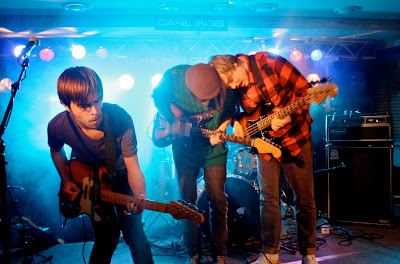 Although the superb Pines (covered here), Kiki Pau’s third album, reached the world as a download last year it was only released in physical form last month – probably proof that good comes to those who wait. Their momentum has been sure, but measured. A first encounter with them live came in October 2010.

That was incredible. Made all-the-more flummoxing by some familiarity with the Kiki Pau of White Mountain, the not-so striking 2010 album which preceded Pines.

A few of the White Mountain songs remained at that show, but they’d been reconfigured and poured into an all-out psychedelic vortex that eddied with Eight Miles High harmonies, Quicksilver Messenger Service at their 1967-68 ballroom peak, the more clipped side of Anthem Of The Sun,  Electric Music For The Mind And Body, Marquee Moon and Take Me To The Other Side Spacemen 3. A genuine wig lifter. A subsequent brush with them live was as tremendous. There were two Kiki Paus: each either side of White Mountain.

Also in there is a kinship with Dungen. It made sense that Pines was mixed by their Gustav Ejstes. The Helsinki-based Kiki Pau are: Henrik Domingo (guitar), Aleksi Gustafsson (bass), Olli Juvonen (drums) and Pauli Saarikivi (guitar).

Kiki Pau – the reborn, post-White Mountain Kiki Pau – are not post-rock instrumentalists. Live and on Pines they are about songs; taking them to their outer edges. A psychedelia. But not one that's revivalist.

Voyaging deliberately to the core of the music while retaining a diamond-hard power and precision – what could be flabby is meticulous – is particular and central to one strand of Finland’s greatest music. A uniquely Finnish and seductive intensity shared by bands (current or not) and solo performers as disparate stylistically as Shogun Kunitoki, Teemu Elon Puhuvat Eläimet, Pekko Käppi, Sami Kukka, Murmansk, Joensuu 1685, K-X-P, Sinaii, Mr Peter Hayden – and others missed or not-yet heard of. None turn it on – they just are. It’s instantly clear when it’s assumed.

The Kiki Pau of now are special, and in rarefied company.

So it was obviously time to find out a bit more.

What happened after White Mountain is crucial. “After we released our second album our label at the time was sold to Universal Music and soon after, we were kicked out, basically”, explains Pauli. “We also stopped working with the Finnish agency that had sold our gigs, so it was really about going back to the very start career-wise - though I’m not sure if I would call our short history a career. It brought us to thinking about some very fundamental questions. Did we still want to continue making music together? If so, then why? Why did anyone of us want to be in a band in the first place? We decided to continue, but basically we forgot about pretty much all our old material and started from scratch. The focus was very much on self-expression, improvisation, using instruments in new ways, very little singing. It was a very different approach from what we were doing early on, and it took us to where we are now”.

Lines could be drawn between this and triumph from adversity, but this was not that – Kiki Pau made a choice they did not have to make.

Equally, a line could be drawn between this new expression and that inherent to jazz. Pauli’s response to the suggestion is justifiably cautious. “I don’t know,” he says. “I like the kind of music where the emphasis is on self expression and individuality through the handling of one’s instrument. This sort of approach is very fundamental to jazz music, I guess. I like the idea that you can recognize the guitar player or the drummer because they have a unique style of playing their instrument”.

As to whether Finland is heard through Kiki Pau? “I don’t think that the music we play is very Finnish in any way”, he suggests. “The musical influence mostly comes from abroad. We have been toying around with a few songs that have lyrics in Finnish though. But being Finnish and living in Finland does affect the work we do. It’s pretty difficult to book shows or tours when you’re living far up north, you know. And maybe we also do feel a bit isolated. The dark and long winters are good. You tend to play and make a lot of music around that time of the year, since you have nothing better to do”.

Whether they relate to anything going on now is equally thorny for Pauli. “If being ‘now’ refers to being fashionable, then I guess we’re not ‘now’ at all. But I don’t think that we’re a group of psych-rock revivalists living in the land of nostalgia either. Hard to say. You’ll have to decide for yourself”.

And there it is. Like their stylistically disparate but also fantastic fellow Finns, Kiki Pau do not turn it on – they just are.