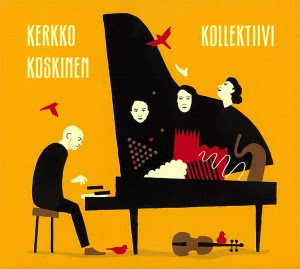 Instantaneous communication doesn’t necessarily guarantee that knowledge about something comes the moment it reaches the world. The Kerkko Koskinen Kollektiivi album was released last August in Finland. I encountered it in February as a result of it being one of the 12 finalists in 2013’s Nordic Music Prize. It didn't win. First Aid Kit did.

Alongside fellow Finnish finalist Pää kii – whose album is terrific non-clichéd and contemporary melodic punk – it was an unknown quantity. Hearing a snatch of one Kerkko Koskinen Kollektiivi track was enough to make it instantly necessary to find it what it was.

Kerkko Koskinen Kollektiivi is an odd album, not like or part of anything else going on right now. Springing off from show tunes, schlager, jazz, spy soundtracks and the drama of Russian pop, it’s out there on its own. It’s also brilliant.

As it’s all in Finnish, working out what’s being sung about is difficult. But that doesn’t really matter as it’s all so impactful and atmospheric. A clue to that atmosphere comes from the song Laura Palmer, a nod to Twin Peaks and David Lynch. Overall, the mood is dark, suggestive of sinister goings on. It could soundtrack someone spiralling towards their downfall.

Musically, the orchestration, prominent piano and rich brass add to the spectacle. Vocals are forward and declamatory. All this would be striking enough, but the sense of melody makes it linger even more. It must have touched a chord in Finland as it topped the album charts. Yet Kerkko Koskinen Kollektiivi didn’t win the Nordic Music Prize and was probably never going to. Good on Finland for choosing and putting forward such a magnificent and truly left-field record.

Kerkko Koskinen is resolutely a local flavour. He was a mover in Ultra Bra, has also written film soundtracks and a Eurovision entry. For his Kollektiivi he assembled the female trio Manna, Paula Vesala (of PMMP) and Vuokko Hovatta (who was in Ultra Bra too). Like Koskinen, all are known quantities and successful in Finland, making the Kollektiivi a sort of super group. All, to one degree or another, have acted and/or been involved in film.

It’d be sad if Kerkko Koskinen Kollektiivi remained for Finland only. This is a wonderful, joyous album and – as happened in February – once heard, demands instant investigation.