Finland’s RUMBA magazine has just celebrated its 30th anniversary (the issue dated 0.9.2103-18.10.2103) and I was asked to write for it – a privilege. The piece was on Musta Paraati’s Peilitalossa, an album I’d never heard beforehand. They were RUMBA's first cover stars.

This was written after receiving the Svart Records reissue, but I didn’t read its liner notes so as to have a completely fresh impression. After much brow furrowing, Joy Division didn't bubble up from the mix.

Below is the piece in Finnish as it appeared and below that, for non-Finnish speakers, the English version. 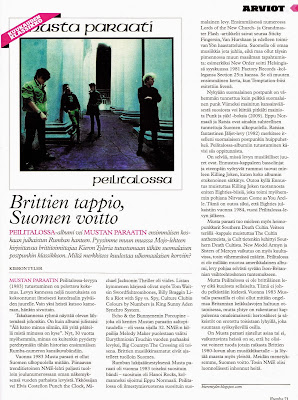 Coming to Musta Paraati’s Peilitalossa cold is a daunting experience. Here are four young men gathered on the sleeve amongst the columns of what appears to be a cathedral. Only one of them is looking at the camera and he’s doing that sideways. On the back, they seem to be in the process of leaving somewhere. It’s an album declaring “don’t look me in the eye, don’t work out what I’m about.” Whatever Musta Paraati may have been saying back then, 30 years later I’ve been asked to react to encountering the cover stars of Rumba’s first issue for the first time.

In their reader’s poll of 1983, published in the fourth issue, Musta Paraati were Rumba’s second best band – between Hanoi Rocks and Eppu Normaali. Peilitalossa was the top Finnish album. Inside the first issue, interviews with Lords of the New Church and Grandmaster Flash were complemented by features on Sticky Fingers, Van Hurskas and the still-extant Yö. Finland had music to celebrate and wasn’t totally off the map: New Order played Helsinki with fellow Factory Records’s band Section 25 in September 1981. It was the first time “Temptation” was aired live.

Nowadays, Finnish post-punk is less familiar than punk, largely due to the incredible Punk Ja Yak! box set. Eppu Normaali and Ratsia are – relatively – well known outside Finland. And Ratsia’s fantastic 1982 album Jäljet is – for me, so far – Finnish post-punk’s peak moment. Spending time with Peilitalossa was going to be an education.

Musically, Peilitalossa’s roots are explicit. The bass guitar and rolling drums opening “Ennustus” are reminiscent of Killing Joke, as is a lot of the album’s forward-motion chug. Bizarrely, the Killing Joke song most coming to mind in relation to “Ennustus” is “Eighties” , the future basis of Nirvana’s “Come as You Are”. Bizarre as “Eighties” was issued in 1984, a year after Peilitalossa.

The other British band bubbling up are tribal punks Southern Death Cult. Musta Paraati’s “Veitsen Terällä” could easily be reconfigured as the sort of anthem The Cult – who evolved from Southern Death Cult – later doled out. To a lesser extent, New Model Army and The Sisters of Mercy are in there too, both of whom first attracted attention in Britain in 1982. There is nothing American about Peilitalossa, which clearly draws from a deep knowledge and enthusiasm for the UK’s alternative scene.

But Peilitalossa is not British and does not sound British. This is about more than language, which obviously informs the rhythmic bed. Although Musta Paraati would have had no problem taking Britain’s stages in 1983, their songs are structured idiosyncratically: choruses and verses are split from each other by short segments diving off elsewhere. Some of this is to accommodate texture from synth and the odd snatch of drum machine, but it’s a sensibility unique to the band.

Whether Musta Paraati considered it or not, the most striking thing about them is that they would have brought something fresh to Britain in 1983 and found an audience. What they were singing about would not have mattered. Our loss, Finland’s gain. Naturally, the NME would have hated them.
Posted by Kieron Tyler at 08:00