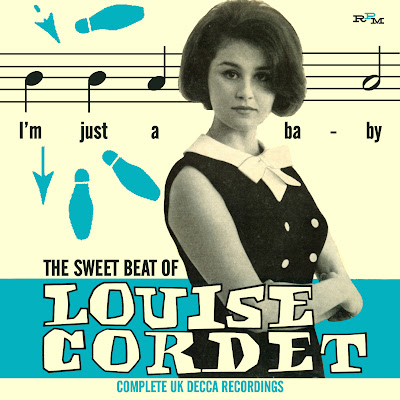 Been working on this, issued in the third week of March.

It’s great to have this out - the first time on CD for Louise. But what’s even greater was speaking with Louise for the liner notes.

After hitting the British charts in summer 1962 with her debut single “I’m Just A Baby”, Louise Cordet issued four more singles, toured with The Beatles and recorded the first version of Gerry Marsden’s’ future hit “Don’t Let The Sun catch You Crying”. She also had a string of France-only releases, sung in her mother’s native language. She toured France with Johnny Hallyday and played L’Olympia. Uniquely for the period, her British label aimed her both at France and the UK. It was as though there were two Louise Cordets – one British, the other French.

Well connected in showbiz via her family, she also snuck into a couple of pop movies. Yet she didn’t carve a career in music and faded away, with only the skeleton of her story known.

Louise reveals how it was probably inevitable that she wouldn’t go on to be a Cilla Black or a Sandie Shaw. Her life in pop was brief, but she never thought it would be more than that. It’s this refreshing outlook that brought her records their immediacy, their vitality.