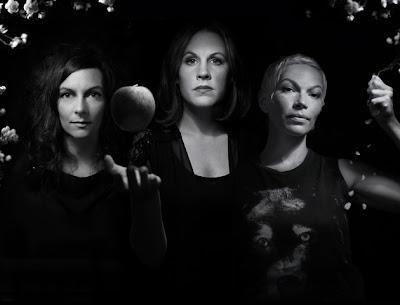 A first encounter with Eplemøya Songlag isn’t easily forgotten. Seeing them in Oslo a few years ago left an indelible impression.

A trio, they used no instruments. The vocals were wordless. There were some subtle treatments of the voices: a touch of reverb. Rhythms came from the voice, but this wasn’t a tripled-up human beatbox. When the vocals – rounds, soaring passages, whispers – were punctuated, it was with sharp exhalations like hammer blows or bubbling. Arresting and powerful, yet tonally shaded, it was utterly memorable and unlike any other music.

The arrival of their second album, Möya Og Myten, brought the opportunity to check in with Eplemøya Songlag and find out about their world. Although bracketed as folk, they breach musical boundaries, setting their own style.

Eplemøya Songlag are Liv Ulvik, Wenche Losnegård and Anja Eline Skybakmoen. Each is solely credited with vocals. Liv’s background is in folk, while Wenche and Anja come from jazz.

Möya Og Myten goes further than their 2011 eponymous debut album as it captures the impact of their live shows. Being all in Norwegian brings no barrier to being bowled over. Translated as Maiden and the Myth, the album collects songs about women. Mostly allegorical, but still direct, they address perception and place. Some are arrangements of traditional material, some bring melodies to poems. Others are new compositions.

Helpfully for non Norwegians, the new album’s booklet has short English-language summaries for each track – on both the background and genesis of each song, and its narrative. It’s not strictly necessary to know that Huldresong is about the huldra (the hulder), a siren-like, forest-dwelling mythical woman with a cow’s tale who lures men to her cave (who also crops up Swedish and Sámi stories). The song is quite spooky enough without knowing the meaning of the words. In Olav Og Elvarkvinnene, Olav has a fateful encounter with female elves while riding off to invite guests to his wedding. The newly composed Kvelerslangen carries a warning about a python. Even without any knowledge of Norwegian, Möya Og Myten is a pleasure as it’s so atmospheric, so powerful.

Stylistically, Eplemøya Songlag draw on Norwegian kveding singing. “Liv has studied the kveding,” explains Anja. “Her way of singing, combined with two jazz singers, becomes something new and fresh. The three of us have very different musical backgrounds and very different voices, and we sing together with that in mind. The difference between us is important. We look at our different approaches as a strength. We use these differences as much as we can to reach a result that everyone is satisfied with. We both try and want to bring out the best and most special in all three voices.”

Although the stories on Möya Og Myten look to the past, Eplemøya Songlag take care that they still resonate. “We find the Norwegian music tradition, with its bizarre stories and beautiful melodies, very enchanting,” says Anja. “It´s important to us that the stories we pick are somewhat relevant for our lives today. And many stories are. On Möya Og Myten, we searched for old myths, urban myths and mythical characters in traditional Norwegian history and culture. We used about a year to find the right stories and melodies for us. We search online, in archives at the libraries, talked to story tellers here in Oslo and so on. On our first album we searched for stories about strong women taking responsibility of their own lives no matter what. For example, the story about the girl who didn´t have a man. She was so desperate to find a man that she eventually made herself a man out of branches from trees and intestines from one of her dead sheep. And this self-made man was as good as any other man. That´s something to think about.”

The music is as exacting as the search for subjects and songs and, especially live, sounds difficult to create. “Our main goal is to maintain an acoustic sound,” says Anja. “If we use microphones on stage, we always try to reach the same sound as if we were singing with no amplification. Because our repertoire is challenging when it comes to voice technique and register, we often need microphones to get the details in our music out to the audience.”

As to whether the music of Eplemøya Songlag is folk – or not - Anja says “our music is a kind of folk, I think. But it´s not so important that we label our music. We have three feet in folk music. But the other three are set somewhere else - inspired by Bulgarian women´s choirs, jazz, world music, vocal styles from other countries and cultures. As long as we can perform these stories and this music that we love, we´re satisfied.”