MOTORAMA – INTERVIEW WITH THE SOUND OF YOUNG RUSSIA 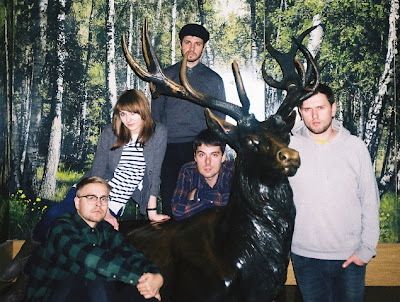 As far as most maps – literal and figurative – are concerned, Rostov-on-Don is the gateway to The Sea of Azov, the massive inland expanse of water which, via a strait, drains into The Black Sea. Beyond: there is Turkey, The Aegean and The Mediterranean. Rostov-on-Don is obviously strategic, and also located where Russia is at its narrowest between The Ukraine and Georgia.

Historically, there have been Armenian, Greek and Turkish influences. Trade from and with Italy has also been important. Industry, as well as export, dominates Rostov’s economy.

But music? Motorama excepted, the million or so population doesn’t seem to have made a mark, both within and without Russia. The band seem to be a one-off.

The emergence of Motorama as the city’s most notable musical offspring is about more than their context – wherever Motorama come from, they would still make a mark. The reissue of their first album Alps (reviewed here) when taken with their recently released second long player, Calendar (reviewed here) has underlined just what a great band they are.

Alps' arrival brought an excuse to check in with their main man Vladislav Parshin to try and find out a little about what they’re about.

“I started playing in bands in 2001,” he says. “The first was a rock band with a Velvet Underground influence. I was 16. In 2009 I invited my friends to join the band, not professional musicians, but mates with similar music tastes. From the very beginning, Motorama was rough post-punk band. We were fans of ‘80s post-punk. Later, I started to experiment with different harmonies and atmospheres, jangle pop, twee guitars and so on. At the same time I have two another bands: Bergen Kremer, it's me and my wife Irene [Parshina – who plays bass in Motorama]; and Ytro, with the same Motorama members where I sing in Russian.”

“I think we are not popular here,” continues Vladislav. “Rostov is mostly a hip-hop city. Rostov is a big, busy, dirty. It’s not friendly. The youth here are hip-hop fans, football hooligans, indie kids, skaters. We have a river, traffic jams, a big cemetery, hills, a stadium, a forest and only one club where it's possible to play concerts. On the other hand, it's a great city to be isolated from everything and I think that works good for us. But we use the internet to know about music, art, videos, etc. Families and friends are here. We never thought about leaving.”

Explaining more about the origins of Motorama, Vladislav says “I had several songs as demos, they were written for another band, I even had a name for this imaginary band, then I realise that we can try to rehearse them with Motorama. We have no free money for expensive gear. We use what we have or what we can borrow from our friends. I think it's good to make limits for yourself. We are totally DIY and free with all our things connecting with the band and I’m happy that we can do all things by ourselves. For Alps’ guitars we borrowed an old soviet amp - I don't know the name - from our friends. We used very simple mic and record everything directly to the PC. Drums were recorded at our friend’s flat. It was easy, no stress at all. We spent two weeks, sitting together with Maxim [Polivanov, Motorama’s guitarist] after work at his flat. We were recording instruments and voice. Roman [Belenkiy] recorded his drums at our friend’s home studio. It was also rather fast, cheap and easy.” The five-piece band is rounded out by keyboard player Alexander Norets.

French label Talitres picked Motroama up and the band now have, as Vladislav says, “some strong fans in Mexico and Peru.”